As the Center for Behavioral Health and Justice (CBHJ) begins its work with the Michigan Opioid Partnership, Oakland County resident Jean Miller sat down with CBHJ staff on Tuesday, July 16 to share the story of her son’s struggle with opioid addiction and tragic overdose in 2017. In his memory, the Miller family has established the non-profit “Brian Miller Full Moon” to raise awareness and funds to support treatment programs.

Brian was the youngest of the three Miller Boys and a bright, talented musician who began creating music at age 10. After earning a degree in Audio Arts and Acoustics from Columbia College in 2007, he worked at various restaurant jobs as well as dog walking for a short time before beginning a job as Audio Engineer at a music venue in Evanston, Illinois. Then, in May of 2009, at the age of 25, Brian called his mother to tell her he had a problem with heroin.

The news was a devastating shock to the Miller family, who left Metro Detroit to visit Brian in Chicago for Memorial Day shortly after that phone call. After detoxing and receiving treatment back in Michigan, Brian returned to his job in Evanston. By 2011, Brian had lost his job, was homeless, and struggling deeply with his addiction. He entered a rehabilitation facility in Ann Arbor and thrived for three months, writing music about his addiction. He decided against moving to a sober living facility, instead living with his brothers in Ferndale, Michigan. Over the course of the following 6 years, Brian worked in a restaurant and was a staple in the music scene in Ferndale—all as a high-functioning heroin addict. Throughout this period, Brian decided to get sober several times. The waitlist for detox facilities would be too long, so Jean and her husband would help him through detox at the family home. His addiction “ripped our family apart”, Mrs. Miller told CBHJ staff. “What it does to a family dynamic is so awful. You lose your life because you are intent on saving someone else”.

Brian detoxed and got sober in January of 2017. He stayed sober until March of 2017, and the Miller Boys visited Jean and her husband at their Florida vacation home. Brian flew home days before his parents drove back to Michigan. On March 31, 2017, despite having the support of his family and community, Brian died of a fentanyl laced heroin overdose.

The Michigan Opioid Partnership’s strategy is a “no wrong door approach” with the goal of removing barriers to entry for those needing treatment. One of the lessons imparted by Mrs. Miller was that, even when family, friends, and community hold open doors for an individual struggling with opioid addiction, there is no such thing as too many doors or too much support.

“As we work on these MAT [Medication Assisted Treatment] grants, this is the person I will have in mind,” said Liz Tillander, CBHJ Deputy Director, with her hand on Mrs. Miller’s shoulder. “This is the outcome we are trying to prevent.” Many of the individuals who enter jail as a result of opioid use disorder do not have the family and support Brian had, making their diversion into treatment all the more important. 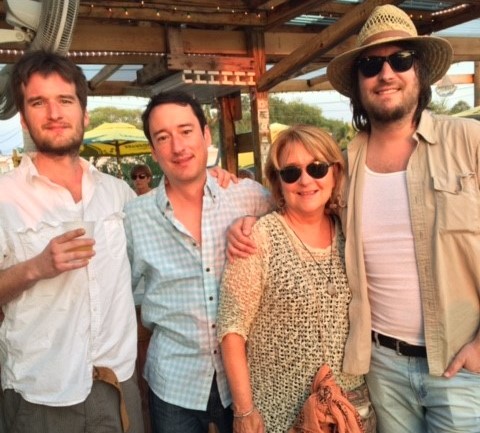 After Brian’s death, the Miller family has focused on helping others struggling with addiction through the Brian Miller Full Moon Charity. The Charity re-grants donations to local programs working directly with those with addiction, hoping to help open doors to treatment for those struggling with addiction. Supported organizations include those that seek to increase diversion opportunities for individuals with substance use disorder, such as the Hope Not Handcuffs program, developed and operated by Families Against Narcotics.

While in college, Brian wrote a song called “Full Moon” about a strange night in Chicago during a full moon. It is a family favorite and the reason for the non-profit name. “Burden”, a song Brian wrote in 2009 about his addiction is featured in a tribute video his brother Andy created after his death, available on YouTube here: https://youtu.be/QRWY59jIWBU.

About the Center for Behavioral Health and Justice: The Center for Behavioral Health and Justice and Wayne State University’s School of Social Work envisions communities in which research, data, and best practices are used by multiple stakeholders to enhance the optimal well-being of individuals with mental illness and/or substance use disorders who come into contact with the criminal/legal system. To learn more, visit behaviorhealthjustice.wayne.edu.