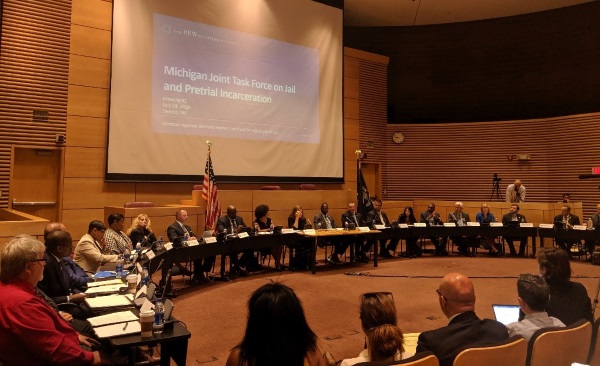 The Michigan Joint Task Force on Jail and Pretrial Incarceration, created through executive order by Governor Gretchen Whitmer in partnership with a bipartisan group of state and county leaders, had its first meeting at the Wayne State University Law School Partrich Auditorium on July 24. Wayne State School of Social Work Dean Sheryl Kubiak was appointed by Governor Whitmer to serve as a survivor of crime and an advocate for crime victims. During her introduction on the Task Force, Kubiak stated she will serve as an advocate for domestic and sexual violence victims as well as individuals who have been victimized by the criminal justice system, noting that victims can be found “both inside and outside of jails”.

The Task Force has been directed to use data and research to make recommendations for state-level changes in law and budgetary decisions that would expand alternatives to jail, safely reduce jail admissions and length of stay, support evidence-based pretrial decision-making, better align state laws with constitutional principles, and provide services and support to crime victims. During the inaugural meeting, technical assistance staff from The Pew Charitable Trusts presented initial findings about jail population trends and state spending, which included data showing that Michigan jail populations have nearly tripled in the last 35 years while crime rates have gone down, rural jails have experienced significant growth and Michigan counties spent $478 million on corrections in 2017.

For over 30 years, Kubiak has been studying the intersections between criminal/legal systems and behavioral health. Most recently, as the founder of the Wayne State University School of Social Work  Center for Behavioral Health and Justice (CBHJ), Kubiak’s research has focused on the use of diversion programs and the integration of substance abuse and mental health treatment into the criminal/legal system in Michigan. The vision of the CBHJ closely aligns with the objectives of the Task Force and CBHJ research has identified many recommendations for jail reform in Michigan. Kubiak shared that “Improving the identification of criminogenic risk and behavioral health needs in Michigan’s jails is one of my primary priorities for the Task Force.” To learn more about the research and findings of Kubiak and the CBHJ, visit behaviorhealthjustice.wayne.edu.

The Task Force will hold public meetings across the state from August through November 2019, with public testimony occurring in the afternoon of each public meeting. The final report and recommendations of the Task Force are scheduled to be released at the Jan. 9, 2020 meeting. The Task Force will seek to educate state and county level stakeholders as well as the public about their findings and strategize for implementation of recommendations through September 2020.

The next meeting is scheduled to take place on August 23 in Traverse City, with later meetings scheduled in Grand Rapids, Lansing and Detroit. If you would like to stay connected with the Michigan Joint Task Force on Jail and Pretrial Incarceration, check the meeting schedule to identify the meeting nearest to you. Additionally, you can sign up for updates from the Task Force website, view their newsletter and view the list of Task Force members to connect with any of your elected officials serving as members.