The Michigan Joint Task Force on Jail and Pretrial Incarceration, created through executive order by Governor Gretchen Whitmer in partnership with a bipartisan group of state and county leaders, recently published its report and recommendations. 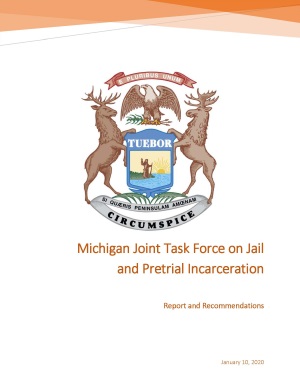 For more than six-months, Task Force members met across the mitten state discussing the use of data and research to make recommendations for state-level changes in law and budgetary decisions that would expand alternatives to jail, safely reduce jail admissions and length of stay, support evidence-based pretrial decision-making, better align state laws with constitutional principles, and provide services and support to crime victims. Wayne State School of Social Work Dean Sheryl Kubiak was appointed to the Task Force by Governor Whitmer to serve as a survivor of crime and an advocate for crime victims. Kubiak has served as an advocate for domestic and sexual violence victims as well as individuals who have been victimized by the criminal justice system, noting that victims can be found “both inside and outside of jails”.

Task Force members heard public comment as they traveled across the state, providing residents of Michigan communities an opportunity to voice their thoughts and experiences with jail and pretrial incarceration directly to the Task Force throughout the year. Testimony in support of reform, representing bail bondsmen, business interests, social justice, physical and behavioral healthcare, liberal policy, conservative policy, local courts, researchers, public defenders, community organizations, and many others was provided.

A multitude of recommendations are detailed in the report, including the suggestion that law enforcement agencies be given additional funding to create or expand existing diversion and deflection programs for the mentally ill. Additional recommendations include:

For over 30 years, Kubiak has been studying the intersections between criminal/legal systems and behavioral health. As the founder of the Wayne State University School of Social Work  Center for Behavioral Health and Justice (CBHJ), Kubiak’s research has focused on the use of diversion programs and the integration of substance abuse and mental health treatment into the criminal/legal system in Michigan. The vision of the CBHJ closely aligns with the objectives of the Task Force and CBHJ research has identified many recommendations for jail reform in Michigan.