Activity across the sequential intercept model and diversion program outcomes

From 2015 – 2020, ten jail diversion pilot programs were funded across Michigan by the Mental Health Diversion Council and the Michigan Department of Health and Human Services to improve response to individuals with serious mental illness (SMI) involved in the local criminal/legal system. The Center for Behavioral Health and Justice, under the leadership of principal investigators Sheryl Kubiak, Ph.D., and Erin Comartin, Ph.D., engaged the pilot counties in a system evaluation to identify and measure interventions across intercepts 1 – 5 of the Sequential Intercept Model. The system evaluation, which began in 2017, followed an implementation evaluation in 2015, as well as short- and long-term evaluation of the pilots in 2016 and 2017. The system evaluation consisted of two cohorts, Cohorts 2017 and 2019, both with two stages. The final aggregate report of Cohort 2019 Stage 2 was presented to the Mental Health Diversion Council on July 13, 2021. In addition, final county-level reports were presented to all ten pilot counties between June and July of 2021. This report summarizes the highlights of the aggregate presentation delivered to the Mental Health Diversion Council in July. 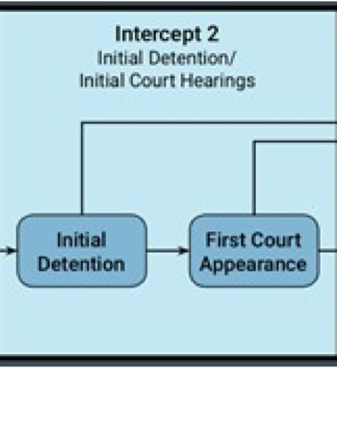 The CBHJ recommends the following practices to improve jail diversion outcomes across the intercepts.

Individuals with SMI spent 27 days in jail compared to 16 days for Non-SMI individuals, even after controlling for offense severity. Jail-based clinicians and/or defense attorneys should advocate for early release, when possible. The use of a 'boundary spanner' who can work with the jail, court, and CMH staff for quick connections to treatment in lieu of time in jail is also beneficial.

The findings above show that CMH services impact linkage to treatment and elongate time to the next jail stay. Increased resources should be offered to CMHs to provide services to individuals in jail with SMI or who are 'mild to moderate'. In addition, supporting the federal House Bill (HR 995, 2021) Medicaid Reentry Act will fund such services within 30 days of jail release.

Those with SMI are significantly more likely to be booked into jail on a technical violation (15%) compared to Non-SMI individuals (13%). Jail and CMH administrators should collaborate with probation and parole offices to decrease returns to jail for technical violations for individuals with SMI. When possible, focused attention on treatment engagement and basic needs could be provided in lieu of a jail stay.

Individuals with SMI had significantly more interactions with law enforcement post-jail release (1.8) than Non-SMI individuals (1.7) significantly increasing the likelihood of recidivism (45% vs. 37%), particularly in rural counties. In line with the recommendations of the Michigan Joint Task Force on Jail and Pretrial Incarceration, we recommend the development of statewide training standards in behavioral health and crisis response for dispatch, law enforcement, and jail officers.

Two-out-of-three individuals in jail were charged with a 'divertable' offense. In line with the recommendations of the Michigan Joint Task Force on Jail and Pretrial Incarceration, we recommend the addition of statutory guidance to authorize local communities to create diversion programs and encourage diversion in certain cases, with consideration for public safety and resource availability, including development and expansion of local programs; diverting individuals charged with misdemeanors and other divertable offenses.

Importance of a County Champion.

In our work as evaluators throughout the jail diversion pilot program, the importance of a jail diversion champion within each pilot county grew increasingly evident. Counties with a champion – someone who is willing and able to raise awareness, engage appropriate collaborators in the effort, build and sustain momentum, and embrace new opportunities – experienced improved sustainability, expanded programming, and new funding. The CBHJ will explore this facet of leadership in an upcoming webinar focused on developing leadership to envision and sustain long-term change.

*All averages shown are median number of days in order to reduce skew from outliers; however, all statistical tests are taken from means tests, as there are no statistical significance tests for medians.